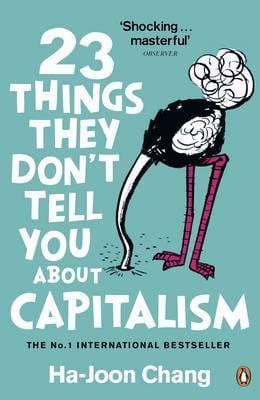 23 Things They Don't Tell You About Capitalism

Ha-Joon Chang's 23 Things They Don't Tell You About Capitalism turns received economic wisdom on its head to show you how the world really works.

In this revelatory book, Ha-Joon Chang destroys the biggest myths of our times and shows us an alternative view of the world, including:

We don't have to accept things as they are any longer. Ha-Joon Chang is here to show us there's a better way.

'The new kid on the economics block ... Chang's iconoclastic attitude has won him fans' - Independent on Sunday

'Lucid ... audacious ... increasingly influential ... will provoke physical symptoms of revulsion if you are in any way involved in high finance' - Guardian

'A must-read ... incisive and entertaining' - New Statesman Books of the Year

Ha-Joon Chang is a Reader in the Political Economy of Development at the University of Cambridge. He is author of Kicking Away the Ladder: Development Strategy in Historical Perspective, which won the 2003 Gunnar Myrdal Prize, and Bad Samaritans: Rich Nations, Poor Policies and the Threat to the Developing World. Since the beginning of the 2008 economic crisis, he has been a regular contributor to the Guardian, and a vocal critic of the failures of our economic system.