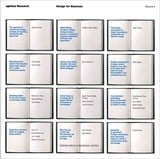 agIdeas 2012 International Research Conference: Design for Business and Industry has received a substantial interest from a range of researchers and professionals coming from the USA, China, Australia, Iran, South Africa, Mexico, Denmark, Italy, UK, Germany and more. We have invited a panel of thirty independent and internationally recognised experts to help us review the submissions, and after a rigorous peer review process, we have selected eleven papers, written by twenty-three authors and co-authors. The conference had a range of inspiring design scholars such as Dr Robert Crocker, an Oxford educated design and science historian and co-editor of a series of books on design and sustainability from the eminent British publishing house Routledge; and design professionals such as Russell Kennedy, the past President of the International Council of Graphic Design Associations (Icograda). We were particularly pleased to hear about the latest fi ndings from the research team at Ehrenberg-Bass Institute for Marketing Science whose clients include companies such as Coca-Cola, P&G, Turner Broadcasting, Unilever, General Motors, Kraft, Nielsen, and Leo Burnett; and by the international interior design consultancy Geyer who works for clients such as Rio Tinto, BHP Billiton, Melbourne Airport, ANZ, Deloitte, Fuji Xerox, and Vodafone.