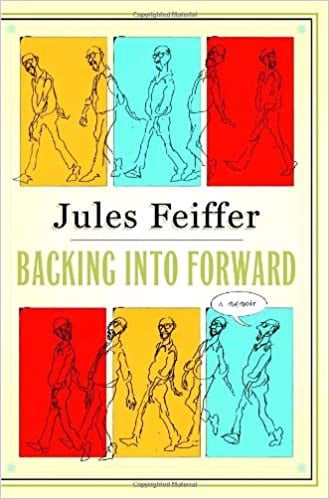 The award-winning cartoonist, playwright, and author delivers a witty, illustrated rendition of his life, from his childhood as a wimpy kid in the Bronx to his legendary career in the arts.

A gifted storyteller who has delighted readers and theater audiences for decades, Jules Feiffer now turns his talents to the tale of his own life.

Plagued by learning problems, a controlling mother, and a debilitating sense of fear, Feiffer embarked on his first cartoon apprenticeship at the age of seventeen, emboldened only by a passion for success and an aptitude for failure. He vividly recalls those transformative years working under the legendary Will Eisner, and later, after he was drafted into the army, his evolution from “smart-ass kid into an enraged satirist.” Backing into Forward also traces Feiffer's love life, from a doomed hitchhiking trip to reclaim his high-school sweetheart to losing his virginity in Greenwich Village, and his road to marriage and fatherhood.

At the center of this journey is Feiffer's prolific creativity. In dazzling detail, he recounts the birth of his subversive graphic novella Munro, his entrée into New York's literary salons, collaborations with film greats Mike Nichols, Robert Altman, and Jack Nicholson, and other major turning points. Brimming with wry punch lines, slices of Americana, and pithy social commentary, Backing into Forward charts Feiffer's rise as an unlikely and incisive provocateur during the conformist fifties and the Vietnam and Civil Rights sixties and seventies.