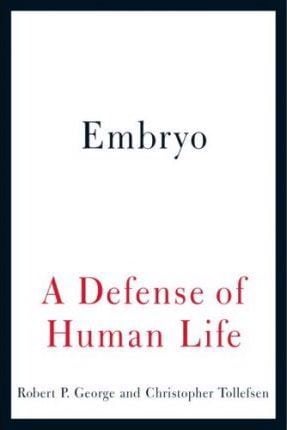 EMBRYO A DEFENSE OF HUMAN LIFE

The bitter national debates over abortion, euthanasia, and stem cell research have created an unbridgeable gap between religious groups and those who insist that faith-based views have no place in public policy. Religious conservatives are so adamantly opposed to stem cell research in particular that President Bush issued the first veto of his presidency over a bill that would have provided federal funding for such research.

Now, in this timely consideration of the nature and rights of human embryos, Robert P. George and Christopher Tollefsen make a persuasive case that we as a society should neither condone nor publicly fund embryonic stem cell research of any kind.

Typically, right-to-life arguments have been based explicitly on moral and religious grounds. In Embryo, the authors eschew religious arguments and make a purely scientific and philosophical case that the fetus, from the instant of conception, is a human being, with all the moral and political rights inherent in that status. As such, stem cell research that destroys a viable embryo represents the unacceptable taking of a human life.

There is also no room in their view for a moral dualism that regards being a person as merely a stage in a human life span. An embryo does not exist in a prepersonal stage that does not merit the inviolable rights otherwise ascribed to persons. Instead, the authors argue, the right not to be intentionally killed is inherent in the fact of being a human being, and that status begins at the moment of conception.

George and Tollefsen fearlessly grapple with the political, scientific, and cultural consequences arising from their position and offer a summary of scientific alternatives to embryonic stem cell research. They conclude that the state has an ethical and moral obligation to protect embryonic human beings in just the same manner that it protects every other human being, and they advocate for embryo adoptionthe only ethical solution to the problem of spare embryos resulting from in-vitro fertilization.