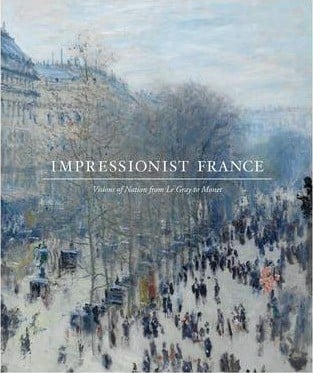 A novel look at the relationship between Impressionist painting and photography and the forging of a national identity in France between 1850 and 1880.

Between 1850 and 1880, Impressionist landscape painting and early forms of photography flourished within the arts in France. In the context of massive social and political change that also marked this era, painters and photographers composed competing visions of France as modern and industrialized or as rural and anti-modern. Impressionist France explores the resonances between landscape art and national identity as reflected in the paintings and photographs made during this period, examining and illustrating in particular the works of key artists such as Edouard Baldus, Gustave Le Gray, the Bisson Freres, Edouard Manet, Jean-Francois Millet, Claude Monet, Charles Negre, and Camille Pissarro. This ambitious premise focuses on the whole of France, exploring the relationship between landscape art and the notion of French nationhood across the country's varied and spectacular landscapes in seven geographical sections and four scholarly essays, which provide new information regarding the production and impact of French Impressionism.