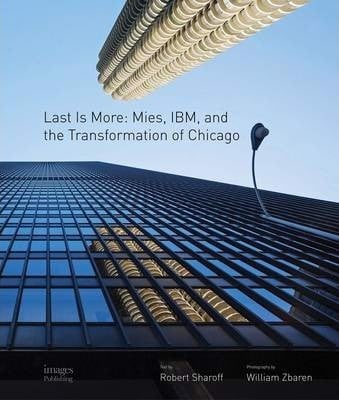 Last is More: Mies, IBM, and the Transformation of Chicago

Architectural photojournalists Robert Sharoff and William Zbaren, creators of the popular "American City" series, use the renovation of the architect Mies van der Rohe's final commission, Chicago's IBM Building, into a five-star Langham hotel as the jumping off point for a wide-ranging coffee table book that examines the noted Modernist's life and work in his adopted city. Eventually, Mr. Sharoff concludes, Mies's vision "came to define Chicago in much the same way that Bernini's does Rome and Haussmann's permeates Paris." The book also looks at Mies's career as an educator at the Illinois Institute of Technology where he was head of the architecture school for two decades beginning in the late 1930s. The book is illustrated with three stunning new photo portfolios by the award-winning Mr. Zbaren that capture key works by Mies as well as by his students and acolytes at firms such as Skidmore, Owings & Merrill, C. F. Murphy & Associates and Schipporeit-Heinrich Associates. In addition to the IBM Building, the structures include the Farnsworth House, 860-880 Lake Shore Drive, Crown Hall, the John Hancock Center, the Willis Tower, the Richard J. Daley Center and Lake Point Tower.