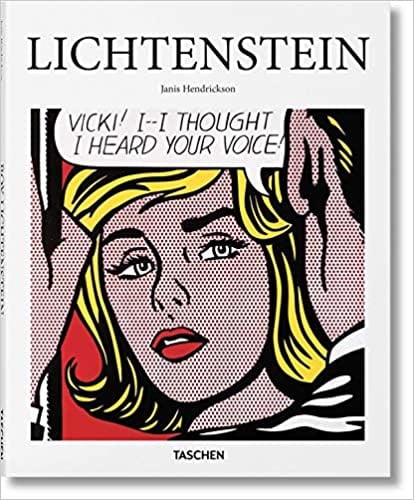 With his groundbreaking use of industrial production techniques and trivial, quotidian imagery such as cartoons, comic strips, and advertising, Lichtenstein joined contemporaries such as Andy Warhol and James Rosenquist to reflect and satirize American mass media and consumer culture. Works such as Look, Mickey! (1961), Drowning Girl (1963), and Whaam! (1963) deployed mass production techniques, particularly Ben-Day dots printing, to create a blow-up effect and pixelated “dot” style, with which Lichtenstein has become synonymous.

This book provides an essential overview of Lichtenstein’s career, tracing his earliest Pop statements through to later “brushstroke” retorts to Abstract Expressionism and reinterpretations of modern masterpieces. We look at his leading position in midcentury modernism, and the ways in which his works both critique and chronicle 20th-century America.

Born back in 1985, the Basic Art Series has evolved into the best-selling art book collection ever published. Each book in TASCHEN’s Basic Art series features:

a detailed chronological summary of the life and oeuvre of the artist, covering his or her cultural and historical importance