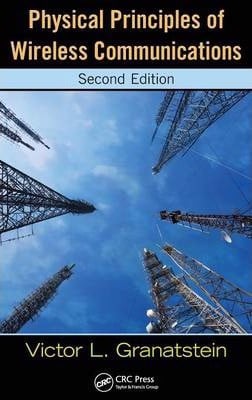 Updated and expanded, Physical Principles of Wireless Communications, Second Edition illustrates the relationship between scientific discoveries and their application to the invention and engineering of wireless communication systems. The second edition of this popular textbook starts with a review of the relevant physical laws, including Planck's Law of Blackbody Radiation, Maxwell's equations, and the laws of Special and General Relativity. It describes sources of electromagnetic noise, operation of antennas and antenna arrays, propagation losses, and satellite operation in sufficient detail to allow students to perform their own system designs and engineering calculations.
Illustrating the operation of the physical layer of wireless communication systems-including cell phones, communication satellites, and wireless local area networks-the text covers the basic equations of electromagnetism, the principles of probability theory, and the operation of antennas. It explores the propagation of electromagnetic waves and describes the losses and interference effects that waves encounter as they propagate through cities, inside buildings, and to and from satellites orbiting the earth. Important natural phenomena are also described, including Cosmic Microwave Background Radiation, ionospheric reflection, and tropospheric refraction.
New in the Second Edition:
Descriptions of 3G and 4G cell phone systems
Discussions on the relation between the basic laws of quantum and relativistic physics and the engineering of modern wireless communication systems
A new section on Planck's Law of Blackbody Radiation
Expanded discussions on general relativity and special relativity and their relevance to GPS system design
An expanded chapter on antennas that includes wire loop antennas
Expanded discussion of shadowing correlations and their effect on cell phone system design
The text covers the physics of Geostationary Earth Orbiting satellites, Medium Earth Orbiting satellites, and Low Earth Orbiting satellites enabling students to evaluate and make first order designs of SATCOM systems. It also reviews the principles of probability theory to help them accurately determine the margins that must be allowed to account for statistical variation in path loss. The included problem sets and sample solutions provide students with the understanding of contemporary wireless systems needed to participate in the development of future systems.