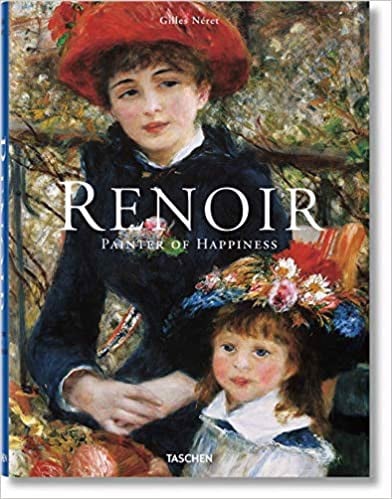 “Why shouldn’t art be pretty? There are enough unpleasant things in the world.” ―Pierre-Auguste RenoirPierre-Auguste Renoir’s timelessly charming paintings still reflect our ideals of happiness, love, and beauty. TASCHEN’s Renoir: Painter of Happiness, the most comprehensive retrospective of his work yet published, examines the personal history and motivation behind the legend. Though he began by painting landscapes in the Impressionist style, Renoir (1841–1919) found his true affinity once he started painting portraits, after which he abandoned the Impressionists altogether. Though often misunderstood and criticized, Renoir remains one of history’s most well-loved painters―undoubtedly because his works exude such warmth, tenderness, and good cheer.

In an incisive text tracing the artist’s career and stylistic evolution, Gilles Néret shows how Renoir reinvented the female form in painting, with his everyday goddesses and their plump forms, rounded hips and breasts. This last phase in Renoir’s work, in which he returned to the simple pleasure of painting the female nude in his baigneuses series, was his most innovative and stylistically influential, and an inspiration to both Matisse and Picasso.With a complete chronology, bibliography, index of works, and 600 sumptuous large-format color reproductions, as well as photos and sketches illustrating Renoir’s life and work, this is the essential work of reference on this enduring master artist.