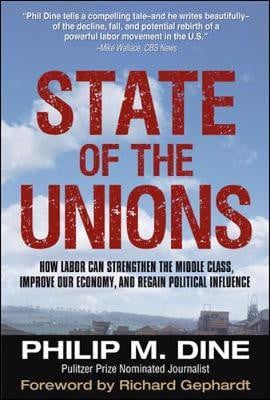 State of the Unions

Publication date 01 Sep 2007From steel workers, Teamsters, and coal miners to teachers, actors, and civil servants, union members once accounted for more than one third of the American workforce. At a mere 12 percent, union membership today is a shadow of what it once was. What happened to organized labor in America and what can be done to restore it to its role of the defender of middle-class values and economic well-being?

Award-winning investigative reporter Philip M. Dine takes us on a riveting journey through America's cities and back roads, its factories and union halls, to answer those questions. From the health care crisis to massive job flight overseas, from rampant home foreclosures to illegal immigration, he clearly shows how virtually every major economic, political, and social trend impacting our way of life is tied to the state of America's unions.

Combining a compelling narrative with expert analysis, Dine offers firsthand accounts of the union members striving to make their voices heard in a political landscape increasingly shaped by corporate interests, including how:

The women of Delta Pride-a major player in the multi-billion dollar catfish industry-went up against generations of racial and economic prejudiceIowa's firefighters union flexed its collective muscle to score a major political victory in the 2004 caucusThe American Federation of Teachers and the AFL-CIO played a key role in bringing down the Iron CurtainThe Teamsters enlisted community support to temporarily stop a move by Mr. Coffee to relocate to Mexico and saved nearly 400 manufacturing jobs in the Cleveland area
A reporter who has covered labor for two decades, Dine not only details where labor has gone wrong, but he also offers sage advice on how it can adapt to a global economy to recover the ground it lost over the last quarter century.