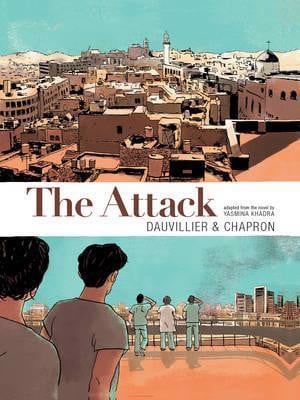 The Attack opens with Amin Jaafari, an Israeli surgeon of Palestinian after the deadly attack, an Israeli police officer informs Jaafari that the suicide bomber was his wife, Sihem. Believing her to be on an overnight trip, he completely refuses to accept the accusation. They were leading an ideal life in Tel Aviv, moving among both Arab and Israeli society with ease, or so Jaafari thought. But then he receives a posthumous message from Sihem confirming the worst. Desperate to understand how he missed even the slightest clue, Jaafari leaves the relative security of Israel and enters the Palestinian territories to find the fanatics who recruited her. In search of the truth, he confronts a reality that he had refused to see. This book was first published as the French novel L'Attentat by Yasmina Khadra in 2005. One year later, L'Attentat was translated into English as The Attack and it garnered international praise: 'A fierce rendering of geopolitical tensions and a plea for peace' (The New York Times); 'Audaciously conceived, courageously important [and] urgently humane' (The Los Angeles Times). It was translated into more than 20 languages and sold over 600,000 copies.
Then in 2012, the original French book went into graphic form with the release in 2012 of L'Attentat by Loic Dauvillier and Glen Chapron. This has now been translated into English by Ivanka Hahnenberger - the book featured here. The Attack is a poignant tragedy that mixes the intimacy of grief and betrayal with the futility of the Israeli-Palestinian conflict. It makes no judgment and takes no side. Chapron's masterful illustrations and astute text are wrought with the despair and hope of Jaafari's search. The raw humanity of the story raises more questions than can be answered. Timely and affecting, The Attack is an essential purchase.