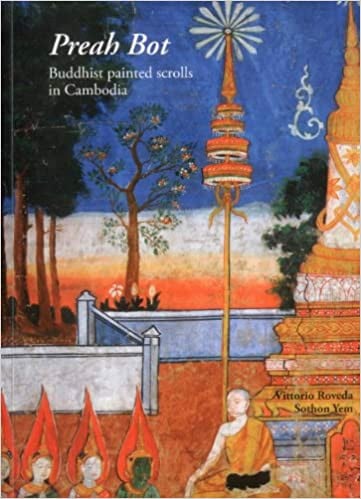 Preah Bot are portable paintings on canvas which represent either single episodes from the life of the Buddha or from the Jataka tales, in particular the last ten stories, the birth tales of the Buddha. In the past they were presented by lay people to the monasteries during religious festivals as a means of merit-making. They may then have served as a substitute for murals in wooden temple buildings where murals were not possible. Following the acclaim for 'Buddhist Painting in Cambodia', Vittorio Roveda and Sotham Yem have sought to document both their aesthetics and their meaning before the use of Preah Bot in a strictly religious sense has disappeared. Instead today they are being produced purely as souvenirs for tourists or for collectors. The book is also intended as an encouragement to the Cambodian People to preserve and study their important Buddhist heritage.